The International Congress of Priestesses and Priests of Afro-American Religions is an event organized by the Umbanda Theology School in conjunction with various spiritual fathers and mothers of these religious traditions of various parts of the world such as Brazil, Uruguay, Paraguay and Portugal. This congress has as its main objective to speak with society relevant community issues, taking into account the important and rich diversity in various schools that make up this religious knowledge.

Thus, in 2011, was held the second edition of the Congress, where priests and priestesses from all regions of the country and the representatives of these traditions in South America and Europe discussed the common theme: "Sociocultural Visibility of Afro-Brazilian Religions " respecting different points of view of each particular tradition and geopolitical location of these social and religious communities.

The highlight of the event was the rite of Exu where the various Schools of Afro-Brazilian Religions ritualized in a peaceful coexistence. More than that, all were taken by Exu literally to the street and in public places took this message of unity to society as a whole, because this is where the inequalities are reversed by the similarities while respecting the differences.

This event marked an advance in the consolidation of knowledge of plural priesthood and theological with an emphasis on Afro-Brazilian religions, because it shows in practice that it is possible to converge different knowledges without imposing a viewpoint over the other.

In the year 2012 will be held the third edition and now, FTU with the construction of this blog, stimulates the creation of several hubs of dialogue for priests to speak out on the most varied topics that impact our religious community and civil society a whole.

These dialogues will be conducted via the internet blog and will culminate in the next rite of Exu and Priests Congress to be held on 10.27.2012 in the premises of the Umbanda Theology School.

We invite all priests and priestesses and their acolytes to join the more than 80 leaders of Brazil and the world in order to enhance and collectively construct a proposal for peaceful coexistence grounded in real experience of acceptance and diversity.
Postado por Yabauara às 7:43 PM 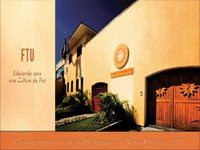